iPad remains the world’s most popular tablet by a significant margin, having outsold competing devices from rivals Samsung and Amazon combined last year, according to data shared by research firm IDC today.

Apple sold a total of 43.8 million iPad units in 2017, as confirmed by its quarterly earnings results, while IDC estimates that Samsung and Amazon shipped 24.9 million and 16.7 million tablets respectively on the year. The combined Samsung-Amazon total of 41.6 million tablets is 2.2 million lower than iPad sales.

Apple captured a 26.8 percent share of the tablet market in 2017, meaning that roughly one in every four tablets sold last year was an iPad. Apple’s tablet market share rose 2.5 percentage points year-on-year. 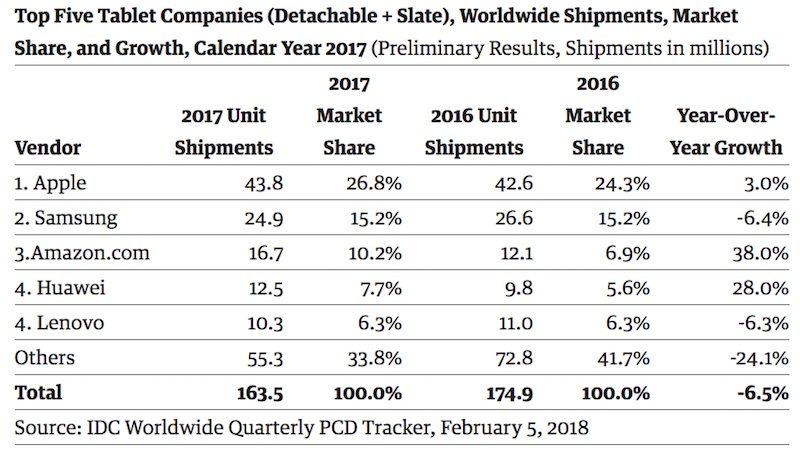 Last week, Apple reported revenue of $5.8 billion from iPad sales in the fourth quarter of 2017, representing growth of six percent compared to the year-ago quarter. Apple’s average selling price of an iPad was $445, up slightly from $423 in year-ago quarter, suggesting more higher-priced iPad Pro sales.

Apple’s growth in iPad sales, albeit relatively flat, contrasted with the overall tablet market’s 6.5 percent decline in shipments in 2017 compared to 2016. iPad has been the world’s most popular tablet since shortly after it launched.

Shifting focus to this year, Apple is rumored to launch at least one new iPad Pro model with slimmer bezels, no home button, and Face ID. We haven’t heard much about the lower-cost 9.7-inch iPad and iPad mini, but each could certainly receive a routine speed bump this year among other upgrades as well.